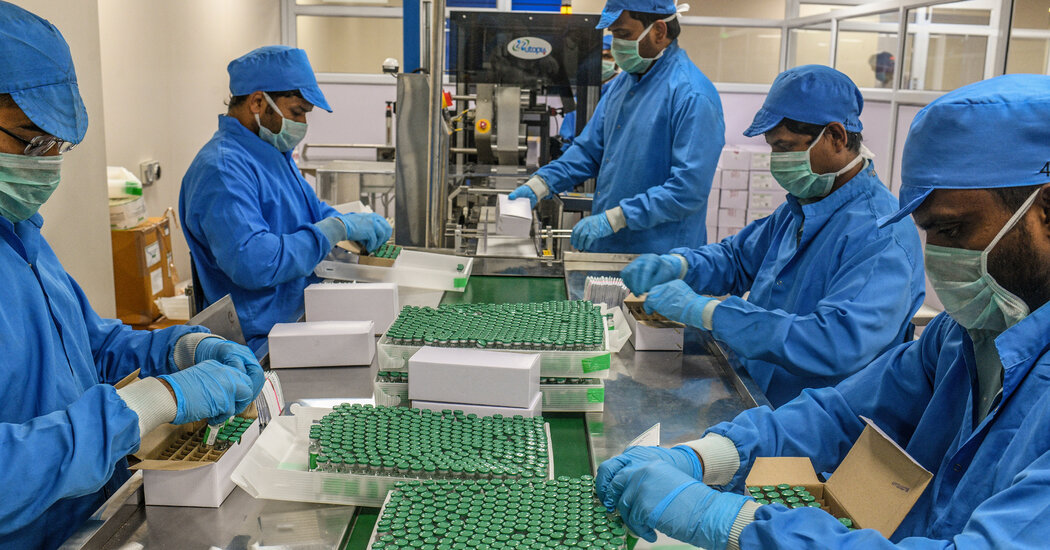 The Serum Institute, the world’s largest vaccine maker, had vowed to take a leading role in India’s fight against Covid-19, and the country’s prime minister, Narendra Modi, had pledged its vaccines would “save humanity.”

Now, those promises have fallen apart.

Serum is failing to uphold export deals worth hundreds of millions of dollars. India largely stopped vaccine exports as its crisis intensified. AstraZeneca has since served Serum a legal notice over delivery delays, and other suffering countries are scrambling to find alternatives.

But even though the company is contributing 90 percent of India’s vaccine supply, it is still falling short. A fire delayed plans to ramp up production, limiting the company’s output to 72 million doses a month in a nation of 1.4 billion people.

A new development: A potentially fatal fungal infection, mucormycosis, is emerging among India’s Covid patients. Some experts attribute the infections to an increased use of steroids, while others say they crop up when families apply oxygen therapy at home without the proper hygiene.

Public and private grief: Relatives broadcast funeral pyres across oceans, news sites play videos of India’s cremation grounds and neighbors record the flames as a rebuke to the government. But as the fires become spectacle, many feel the pandemic has stripped the final rites of their dignity.

Here are the latest updates and maps of the pandemic.

Powerful explosions outside a high school in Kabul killed at least 50 people and wounded scores more, many of whom were teenage girls. The attack underscored growing fears that the American troop withdrawal would leave women, and their educational and social gains, particularly vulnerable.

The high school hosts classes for boys in the morning and for girls in the afternoon. A car bomb detonated around 4 p.m., right as the girls were leaving class. As students rushed out, two more bombs exploded, a government spokesman said.

The presidential palace blamed the Taliban, which denied responsibility and condemned the attack. The massacre has driven home the uncomfortable reality that, as American troops depart, there has been more chaos than accord and more fear than hope.

Analysis: In the power vacuum, many fear the Taliban will soon try to seize power. Even if the insurgents reach an unlikely peace deal with the Afghan government, their harsh Islamist strictures, including keeping girls out of school, could again become the mainstream.

Surging violence: At least 140 pro-government forces and 44 civilians were killed in Afghanistan in the past week, the highest weekly death toll since October.

President Biden and Iran’s leaders say they want to re-enter the nuclear deal that Donald Trump scrapped three years ago. But after five weeks of indirect negotiations in Vienna, it has become clear that the old parameters won’t work, at least in the long run.

Iran wants to keep advanced nuclear-fuel production equipment it installed after the U.S. backed out. It seeks not only relief from U.S.-imposed sanctions that choked its economy, but also integration with the world financial system beyond what was secured in 2015.

At minimum, the U.S. wants to restore the old deal. It also wants an expanded accord that would stop Iran from producing enough fuel for a bomb for decades, halt missile tests and end Iran’s support of terrorism.

Analysis: Restoring the old agreement seems doable, according to European, Iranian and American officials. The lead negotiator made a significant offer to lift some sanctions on Iran that he said were “inconsistent” with the original deal. But getting the expanded agreement the U.S. seeks seems unlikely.

Domestic concerns: In Iran, where presidential elections are six weeks away, powerful conservatives mock the outgoing leadership. In the U.S., Biden must contend with a Congress that is skeptical of a deal and sympathetic to Israel.

Elsewhere in the World

As tourism reopens, pilots are finally behind the wings again. But after a year on land, they’re out of practice. “It’s not quite like riding a bike,” one former airman said. “What fades is the operational side of things.”

Switzerland, from rackets to raclette

Roger Federer is perhaps Switzerland’s most famous son. Now, the international tennis champion has become an unpaid spokesman for the country’s tourism. In a Zoom call with The Times, he shared some of his favorite destination spots — and his love for chocolate. Here’s Federer with some praise for the country’s hiking trails.

Hiking and cycling are the go-to things for everyone to do in Switzerland. Some of the most spectacular hiking trails I like are by Gstaad in the Bernese Alps. It’s not so brutally up and down, it’s more of an even slope, which is great for hiking.

The same goes for Appenzell, which is a very nice place that is not so famous. It’s also where I always went hiking when I was a boy. When I was hurt in 2016, I spent a lot of time on the hiking trails in Graubünden, where I live now. We have the Swiss National Park over there — that whole area is incredible for hiking.

Has Nigeria benefitted from democracy?

Copa America opens in Brazil against backdrop of COVID crisis