Netanyahu angrily vows to his supporters, ‘I will lead you in a daily battle.’ 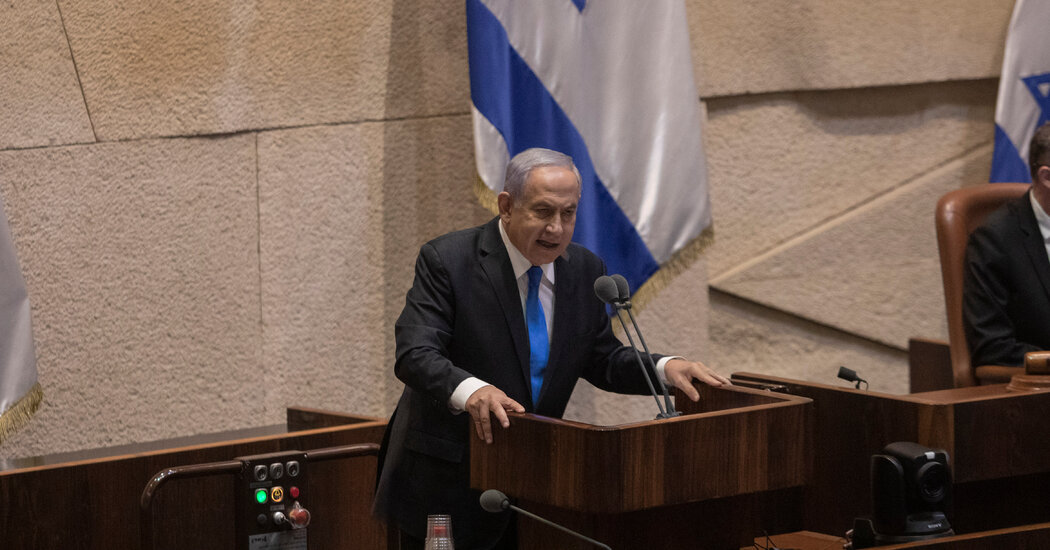 Benjamin Netanyahu, Israel’s longest-serving leader, spent what might be his last minutes in power by defending his record, promising to remain in politics as leader of the opposition, and denouncing his nominated successor, Naftali Bennett.

At a parliamentary debate ahead of the vote to approve Mr. Bennett’s government, Mr. Netanyahu gave what felt like a valedictory speech, listing what he perceived to be his accomplishments in office.

He noted his efforts to keep Iran from becoming a nuclear power and lauded four diplomatic agreements with Arab countries, completed during his tenure, that upended assumptions that Israel would only shore up relations with the Arab world after it had sealed peace with the Palestinians. He also highlighted several favorable moves by the Trump administration that he championed, including American recognition of Jerusalem as Israel’s capital, and the installation of an American Embassy in the city.

“Our successes turned Israel from a fringe state to a leading power,” Mr. Netanyahu said. Then he warned of the harm that he believes a Bennett-led government poses to Israel, and railed against legislation, proposed by the new government, that would limit the ability of prime ministers to remain in office after eight years in power, as he did.

“If we have to be in opposition, we will do this standing tall — until we bring down this dangerous government and return to lead the state,” Mr. Netanyahu said.

Mr. Bennett is a former aide to Mr. Netanyahu who is considered even further to his right. A former software entrepreneur and settler leader, Mr. Bennett is a longtime opponent of Palestinian sovereignty.

After months of wavering, Mr. Bennett broke with Mr. Netanyahu late last month, allying with an unlikely alliance of hard-right, centrist, far-left and Arab lawmakers who are united only by a shared dislike of Mr. Netanyahu. Mr. Bennett said it was necessary to form a government of national unity in order to end a political deadlock that has left the country without a budget and forced the country through four inconclusive elections in just two years.

Mr. Netanyahu and his allies have framed that decision as an act of treachery, leading several of them to heckle and disrupt Mr. Bennett during his own speech earlier in the afternoon. By contrast, lawmakers largely kept quiet while Mr. Netanyahu spoke, in a sign of respect.

“The right will not forget Bennett’s deception,” Mr. Netanyahu said during his speech. “You call yourself guardians of the democracy, but you are so fearful of democracy that you are willing to legislate fascist laws so I can’t run.”

He then addressed his supporters.

“I say today: Do not let your spirits fall,” Mr. Netanyahu said. “I will lead you in a daily battle against this bad and dangerous left-wing government, and bring it down. And with the help of God, this will happen faster than you think.”

‘X’ Marks the Spot: Officials Map a Route Out of the Pandemic